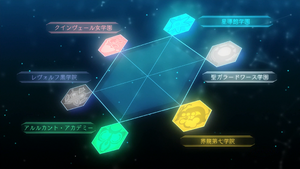 There are six academies within Asterisk that are primarily focused on gathering Genestella students to train and teach. Those schools are Seidoukan Academy, Arlequint Academy, Jie Long Seventh Institute, Rewolf Black Institute, Saint Galahadworth Academy, and Queenvail Girls' Academy. Every year, a fighting tournament known as the Festa is held.

Seidoukan Academy (星導館学園) is the school the protagonist attends. The student council president is decided by an election, with the current president being Claudia Enfield. They are governed by Ginga and have the Kageboshi as their intelligence organization. The Seidoukan emblem is the unyielding red lotus. Seidoukan promotes autonomy within students and therefore the rules are lenient. They also have a considerable number of Strega and Dante. The school building is modern and open with the middle school, high school, and college buildings surrounding an inner garden. Seidoukan specializes in the Phoenix; however, their overall result the season before Amagiri Ayato began attending was fifth place.

Arlequint Academy (アルルカント・アカデミー) is a school in Asterisk. The current student council president is Sakon Shuuma. They are governed by Frauenlob. The Arlequint emblem is the dusk owl. They were originally a weak school along with Queenvail but grew stronger due to their research. Their technology is far superior to the other schools. Arlequint is result oriented and is separated into the research class and the practice class. Unlike the other schools, Arlequint's infighting is fierce, with the research class having different factions. The factions are Ferrovius (獅子派), Pygmalion (彫刻派), Sonnet (黒夫人派), Methuselah (思想派), and Tenorio (超人派). A considerable amount of freedom is permitted regarding research; however, as the Integrated Enterprise Foundation funds their research, their freedom is somewhat limited.

Jie Long Seventh Institute (界龍第七学院) is a school in Asterisk. The student council president is decided by a tournament, with the current president being Fan Xinglou. They are governed by Jie Long and have the Ryuusei Kyuushi as their intelligence organization. The Jie Long emblem is the yellow dragon, the symbol of the emperor. Inside of the school is a building known as the Oushinden, which was built by the first Banyuu Tenra, and whoever managed to open the door would be able to inherit the alias. The alias Banyuu Tenra has special meaning within Jie Long and even the Integrated Enterprise Foundation cannot interfere with the freedom of the student that inherits it. The Ryuusei Kyuushi was created specifically for the Banyuu Tenra, therefore being directly connected to the student council, with hardly any connections to Jie Long. Jie Long is the largest school in Asterisk as well as the only school with an elementary. They promote bureaucracy and laissez faire, with Chinese students being the majority. Since most students focus on training rather entering or winning a Festa, it is hard for the Integrated Enterprise Federation to try to bribe students. Jie Long contains several types of martial arts which are mainly separated into either the Water Faction (水派) and the Wood Faction (木派) and the members of the Water Faction tend to disrespect the Wood Faction.

Rewolf Black Institute (レヴォルフ黒学院) is a school in Asterisk. The student council president is chosen by the rank 1 student, with the current president being Dirk Eberwein. They are governed by Solnage and have the Grimalkin as their intelligence organization. The Rewolf emblem is the crossed swords, the symbol of the conqueror. They enjoy fighting and the school consistently promotes duels between students, therefore making them on bad terms with Saint Galahadworth. Rewolf contains many students with bad behavior, with some even taking up headquarters in the redevelopment area of Asterisk. While there are good students such as Priscilla Urzaiz, they are generally rare. Rewolf specializes in the Lindwurm.

Saint Galahadworth Academy (聖ガラードワース学園) is a school in Asterisk. The former student council president was Ernest Fairclough,the current being Elliot Forster. They are governed by EP and have the Sinodomias as their intelligence organization. The Saint Galahadworth symbol is the aureole, the symbol of order. The school requires discipline and loyalty from their students and generally forbids duels, therefore making them on bad terms with Rewolf. As a result from the lack of duels, it is also more difficult to gain ranks within the school. Saint Galahadworth specializes in the Gryps.

Queenvail Girls' Academy (クインヴェール女学園) is the only all girls' school in Asterisk. The current student council president is Sylvia Lyyneheym. They are governed by W&W and have the Benetnasch as their intelligence organization. The Queenvail symbol is the profile of a nameless Goddess, the symbol of hope. They are the smallest school in Asterisk. It is a bright and gorgeous school that requires good looks in addition to fighting ability and academic achievement. Queenvail ignores the overall ranking, instead seeing Festas as a place to draw out the charm of individual students, which means that their overall ranking in usual Festa seasons is last. Queenvail also contains idols or idol groups, such as Sylvia and Rusalka, with media exposure being relatively high compared to other schools. Because of this, many students at Queenvail register using their stage names.