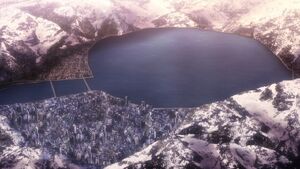 The current monarch is Jolbert Riessfeld, with the former monarch being Julis' father. The capital city is known as Storel (ストレル).

Lieseltania is in a mountainous region that snows. The capital city Storel is located around a lake surrounded by mountains.

The buildings are made of brick and wood, giving off a European feel. There are also office buildings and a railroad that crosses through the city. The palace is located across the lake from the central part of the city.

Lieseltania was a territory of the Holy Roman Empire until its collapse, leading to its independence. The country lasted for 100 years until it was absorbed during the Unification of Germany.

After the Invertia, a 1st class Beltis meteor was found from within the former Lieseltania borders. Solnage and Frauenlob fought over the rights to it, causing the Integrated Enterprise Foundation to create a country there to resolve the problem. As the country was created and is funded by the Integrated Enterprise Foundation, many of its decisions, such as policy and taxes, are decided by them.