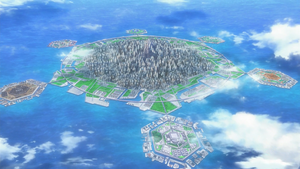 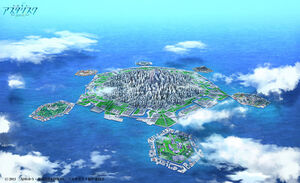 Asterisk is a well kept city on an artificial island, located on top of a crater lake in northern Kanto. The name Asterisk comes from the bird's eye view of the city, which resembles a hexagon. The city is very large, boasting both underground chambers and large buildings on top, as well as numerous ballast chambers to keep it afloat.

The main section of Asterisk is divided into the Central Ward (中央区) and the Outer Residential Area (外縁居住区). The Central Ward is split into two halves with the Commerce Area (商業エリア) on one side and the Administrative Area (行政エリア) on the other.

There is a hotel known as Hotel Elnath (ホテル・エルナト) where the monthly Rikka Garden Conference is held on the top floor. It is located in the area in between the two areas. In addition, the Sirius Dome (シリウスドーム), the largest arena within Asterisk, is located in the same area at the center of the island.

The police department of Asterisk is known as the Stjarnagarm. They only have jurisdiction over the central area of Asterisk as the schools are under their own jurisdiction. They may only enter schools grounds during extreme situations or if they have permission to do so.